Joseph was an unhappy baby.  He didn’t sleep for very long periods, and seemed to cry all the time.  He did best when he was held and rocked, or walked. He spit up after feeding much more than the other babies in the family had.  His parents called him their “high maintenance child.”  He developed some ear infections, which were treated with antibiotics.  With the second antibiotic he received, he developed a rash.  The doctor said he was allergic to amoxicillin, and placed him on another antibiotic.  He got over the ear infection, but continued to be whiny and had diarrhea.  After one more antibiotic he developed a white coating on his tongue, which the doctor called thrush.  As he grew, it became increasingly evident that he was intolerant to some foods.  Milk gave him a stomachache, and oranges gave him a rash around his mouth.  In his pre-school years he was loving and sweet one moment, but easily flew off the handle if he didn’t get his own way.  In fact, sometimes his temper tantrums were a sight to behold.  As he grew, he continued to be plagued with difficulty falling asleep, stomachaches, and frequent canker sores and bed-wetting.  He also had more unusual fears than his brothers and sisters.  As school began for him, his mother noticed that his memory wasn’t as good as his siblings.  He would learn something one day, and have forgotten it the next.  It was hard for him to sit still for a whole lesson often preferring to stand while learning.   Sometimes he looked like a “motion machine.”    Many times he appeared “spacey” while a lesson was being presented, or when asked a question throughout the day.  It was like his mind was always wandering.  When a lesson or project became hard for him, he became frustrated very easily and would flare up or even cry.  Joseph’s mom was at her wit’s end as to how to help him.  She had tried rewarding, cajoling, punishing, and avoiding doing homework altogether.  Nothing seemed to change his attitude towards learning, or ability to do it easily.  He did enjoy the avoidance of schoolwork, however.

Joseph was likely suffering from a lack of the brain neurotransmitter, serotonin.  Serotonin is the brain chemical that keeps us focused, instills a sense of well-being, and helps us fall asleep easily.  How had he gotten this deficiency in serotonin?  That is a very interesting story.  Dr. Michael Gershon, a neurobiologist and medical researcher from Columbia University in New York discovered that ninety-five percent of this brain neurotransmitter, serotonin, is produced in our “gut.”   In fact he has a book called The Second Brain, in which he describes this intricate relationship between gut and brain functioning.  How was Joseph’s gut health compromised so that he could no longer make enough serotonin to keep him feeling good?  In our intestines, we have both yeast and healthy bacteria.  When the mother takes an antibiotic while she is pregnant, or the child takes an antibiotic, the yeast in the intestines begins to overgrow because the good bacteria in the gut is eliminated right along with the bad bacteria that was causing the ear or other infection.  When a child has too much yeast, or mold in his body, it often will often “come out” of the body in the form of diaper rash, hives, thrush in the mouth, canker sores or athlete’s foot.  When the yeast in the gut overgrows it causes tiny perforations in the mucosa lining of the gut, creating some damage to the lining.  It is in this area that the body makes the calming, focusing, feel good neurotransmitter, serotonin.   This slightly damaged gut lining, sometimes referred to as the “leaky gut syndrome,” also allows some undigested food to pass through into the blood stream, and food allergies are created.  The longer this unbalanced environment is allowed to continue, the more allergies that will be created.  With this knowledge, what could this mother do to help her child feel better, act better, and learn better?  She knew he was a smart, good-hearted boy, who wasn’t happy with the way he was acting and learning.

One of the first things that Joseph’s mother did was to begin to replace the good bacteria that had been destroyed by the antibiotics.  She got a good acidophilus in capsule form called Primadophilus that was in the refrigerated section of the health food store.  Since Joseph didn’t like to swallow pills very much, she opened this capsule and put it into his yogurt three times a day.  She didn’t use the chewable or liquid form, because she knew they would be too weak to help Joseph.  Even though Joseph was allergic to milk (remember the stomach aches, and crying baby), he could handle some good yogurt without any reactions.  Sometimes she put it into juice.  It had no taste, so he didn’t mind it.  She started noticing some small changes in him, even in that first week.  His voice wasn’t as loud, and he didn’t constantly need to make those annoying noises with his mouth all the time.  He began to fall asleep easier.  He seemed to be much “mellower,” being able to handle frustration without getting as upset.   Even his brothers and sisters noticed that he wasn’t as mad and touchy as he had been.  He began to be able to pay closer attention to the lessons that were presented.  Joseph’s mother was beginning to become encouraged.  If yeast overgrowth really was the cause of Joseph’s compromised gut and ability to produce enough serotonin, how else could she help his body overcome this unbalanced gut ecology?   She decided to add a natural anti-fungal to his acidophilus regime.  She went back to the health food store and picked up some Grapefruit Seed Extract by Nutri-Biotics.  She bought this in both the tablet and capsule form, since she didn’t know if he would swallow any tablets yet.   At first she opened the capsule, and put the contents into some peanut butter with honey, three times a day.  After a while, he decided that the tablets were small, and easy to swallow.  That made it easier for mom.  Meanwhile, she looked for ways to reduce sugar and carbohydrates in his diet, knowing that these foods directly feed the yeast in his body.  She changed from cereal for breakfast to eggs, peanut butter, protein shakes, even left over dinner, since she knew that protein containing foods not only starve the yeast, but keep the child’s blood sugar level more stable during the day.  She stopped serving so much juice, using water or milk (in Joseph’s case, rice or soy milk) to drink.  She kept cut up vegetables and dip around for snacks, along with more nuts and sunflower seeds.  Soon she began to see a “new Joseph.”  His disposition became much more sunny.  The biggest relief to mom was that his learning became so much easier, because he could attend to the lessons and remember what he had learned from one day to the next.  He still liked to fidget, but was no longer considered a “motion machine.”  As his school day became easier, he began to become more confident in his ability to learn.  He began checking books out of the library like everyone else, and reading them to himself at night.  Joseph’s gut was being healed, and could now be the manufacturing place for serotonin that it was meant to be.

You can help your children focus easier and have better retention by following the week by week, step by step 3 month Targeted Nutritional Intervention Guide as found in the Biology of Behavior CD set. 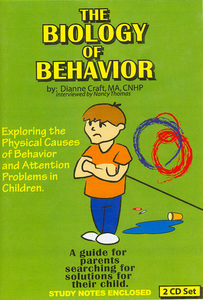 This set comes with the all-important Printed Study Guide that gives you the steps in order, the amounts, best brands, ages, etc.  Many parents report huge changes in focusing, mood, attitude, meltdowns, memory and Sensory Processing issues when they implement this easy to use home nutritional program

WHERE DO I START?